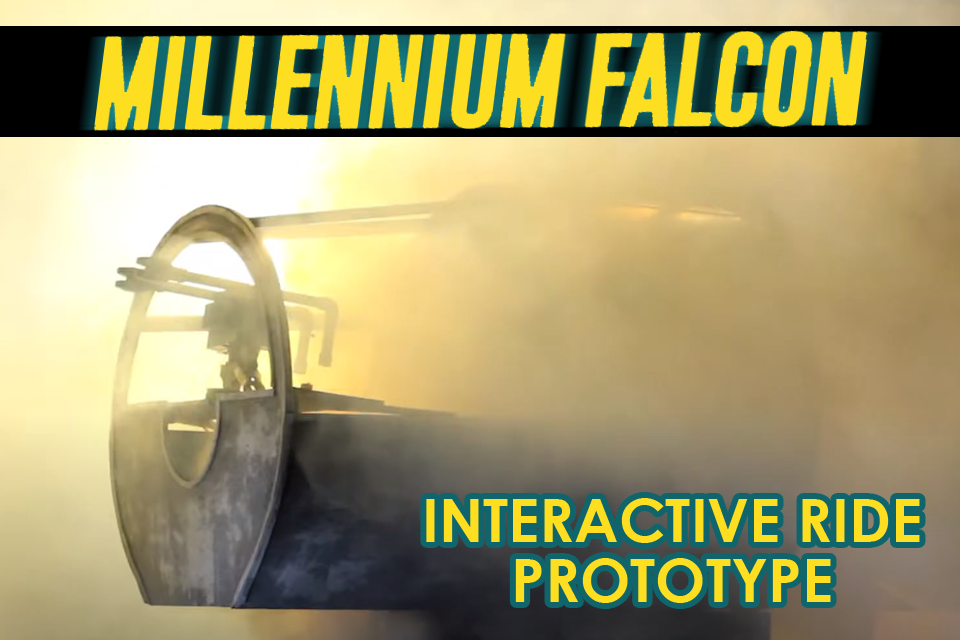 This ride prototype was a project for a hack days competition at work. We had two weeks to hack a project together on our own time, and they gave us a full day off to dedicate to the project. At the end, we presented our projects in front of a panel of VPs at the theater on the Disney lot. We won Most Original Hack.

I’ll go into more detail below, but the basics are as follows: The base of the vehicle was an old electric wheelchair I bought off craigslist. I replaced the motor controllers and communicated with them via Serial from Unity. An onboard laptop and projector ran the game and projected it onto ten plywood panels for a 180 degree, 80 ft circumference play space. It also had some auto pathing functionality using colored duct tape that got ditched the night of filming because it rained.

During the presentation, we all dressed up in Star Wars costumes and the organizers had us lug in the vehicle to put on display for the ceremony. Bob Iger stopped by to see our project and another and give a speech. It looked like he was going to come shake my hand on his way down the theater aisle, and my friend screenshotted the livestream which totally looks like he is addressing me. He definitely had a really powerful-CEO-very-busy vibe and he didn’t even make eye contact. So I smoothly walked past and used my outstretched hand to pretend like I was fixing my hair. Then we all stood awkwardly behind him while he spoke.

Those two weeks encompassed one of my least and most favorite memories of my career.

Least: Early on in the project when I was working on the base, one of our VPs recommended I bring it to a get together to show some imagineers who would be in attendance. I felt uncomfortable to do it, but felt it was an opportunity I couldn’t pass up. I went but didn’t really know many people and was just making nervous small talk with someone I sort of knew when the base malfunctioned and gently drove itself into a couch. While fighting against the seventy pounds of metal with rubber wheels on carpet and trying to reach under to activate my safety shutoff, one of the imagineers walked by and with clear derision, sarcastically said “nice wheelchair base”. It wasn’t even criticism. Just a taunt. Up until that time I had never had any negative experience with anyone at WDI. I regarded them as gods and had never seen one react to anything without enthusiasm or at least an open mind. That comment stuck with me for a very long time, and was the reason I learned to weld soon after. And while I managed to turn it into something positive for me, the experience still stuck. We never ended up meeting that night, and I don’t remember any details about him other than he was tall. So when I eventually did become an imagineer, I couldn’t help but wonder if I had run into him again, or even if we have since become friends, not recognizing each other. I made a strong conscious note to make sure never to put down someone’s hard work – not that I ever would have anyway, but it really cemented it as a core part of my personality.

Most: This one is related in that it involves the same VP that invited me to that get together. Chris Heatherly was the head of the interactive group back when DI and DCPI were still a thing. I wouldn’t say we knew each other well enough for me to consider him a mentor per se, but he knew I wanted to be an imagineer and often went out of his way to encourage me to work on projects on that path or involve me in side work to improve the office. He even went so far as to vouch for me for meetings with high up cast members like Mike White (CTO at DCP) and Jon Snoddy (Head of WDIR&D). Both of whom were honestly probably too important to be meeting with someone at my relatively entry skill level, but the importance of the endorsements was definitely not lost on me. Mike ended up becoming a big supporter of my work, choosing me for the TIE program and giving me pretty much free reign on the Bot Battle project. And I worked on a project for Jon years later that I… hope he ended up happy with, heh. All stories for another time, but back to Chris. He was one of the judges for the Hack Days competition. As we stood at the podium in the theater watching the video presentation of the ride, everyone seemed fairly engaged. But when the player follows the XWing into the Death Star trench during the finale, Chris stood up and cheered with the boisterous enthusiasm he was known for. It’s definitely one of my top ten memories at Disney. The competitions we had there were so important to me, and this Hack Days was all around just really positive. And to have Chris rooting for us made it all the better.

This section lists firsts for me. New features or technology that I had not done previously.

I took out the original electronics of the wheelchair and replaced them with Pololu brand motor controllers. Below you can see a video of the early stages controlling the wheelchair with an XBox controller.

Dave and I took a trip to Home Depot and built all the panels in just a day in his driveway.